Back to CWA Permits

This is the type of permit most private landowners will use. NWPs are streamlined Corps permits for activities that have minor impacts on jurisdictional waters, such as roads and bank stabilization. These NWPs are for five years and the current permits were issued in March 2017. Each of the 45 NWPs has a different set of limits. Generally, but not always, these limits include not impacting more than 0.5 acre of jurisdictional waters (including wetlands) or impacting less than a certain number of linear feet of streambed. Many of the NWPs require notification to the Corps before impacting wetlands or other waters, but some do not. Please note that NWP projects can only be self-verified (meaning there is no pre-construction notice required) if all NWP general conditions are followed/met, including Section 106 Historic Properties and the Endangered Species Act.

The Summary of the 2017 Nationwide Permits Chart (example page below) summarizes the 2017 NWPs, limits, whether pre-construction notification is needed and other details. 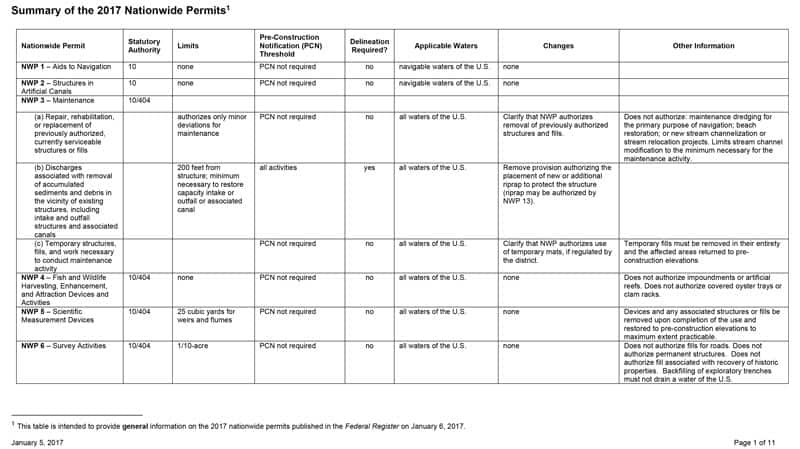 Page from the 2017 NWP Summary Chart. Click for full chart.

If you have a project that would impact any known or suspected jurisdictional wetlands and other waters, outside assistance is strongly advised. The Corps Denver Regulatory Office would be glad to provide assistance or recommend a professional wetland consultant.